Description: This story is about Rishabh Tomar s/o Sh.Kirat Chand R/O Village Khajurna, P.O. - Shambhuwala, Tehsil – Nahan, Distt. – Sirmour, (H.P.). If we talk about the family background of Rishabh, he belongs to a middle class family having father working in the private sector, mother as a housewife and a younger brother. Rishabh Tomar was a student of GSSS BANKALA from class 6th to class 12th. This school offers two Vocational courses out of which Rishabh opted Automobile as his choice and thought of making his career in the automotive sector. He was enrolled under a fast track course in June 2013 and he completed his 4 levels in 2 years. Mr. Javed Akhter and Mr. Manish Bhardwaj were his Vocational Trainers. By April 2015 he was ready to work on his skills. Rishabh however got placement in Snow view Automobiles workshop Paonta Sahib (Mahindra & Mahindra). He started his career by post of a helper on 16 June 2015 with a salary of Rs 5500/- per month. He worked as a helper for 1 year. After that he was offered a 12 days Heavy Commercial Vehicle Advanced Training Programme in ‘Mahindra Institute of Learning’, Agra in August 2016.
After training he was promoted to the post of Technician. Going further he again went for Commercial Vehicle Technician Advanced Training Programme to Mahindra Institute of Learning Jaipur in August 2017. After completion of this training programme he again got promotion and he started earning Rs 11800/- per month. However, to achieve his higher studies he quit from this job on 4 Sept 2019. Now he is pursuing ITI in Govt. ITI Nahan. So this is the story of a boy who built his career in the Automotive Sector. 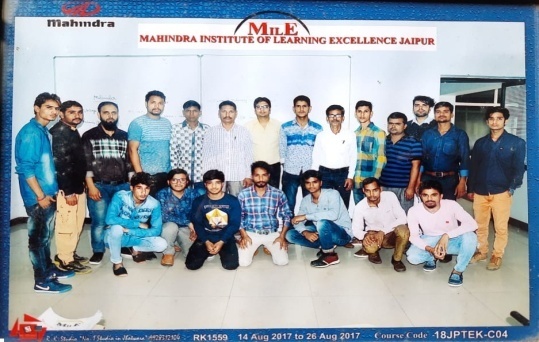